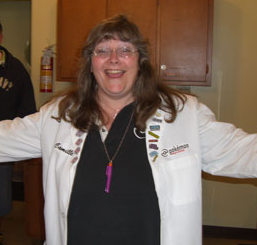 I’ve been involved with Pokemon since 1999 when I started bringing my sons, Devin and Dustin, to the Pokemon League at Tomorrow Is Yesterday in Rockford IL.  It was instantly a huge part of our lives and we spent every Saturday there in the game room, meeting and playing with others who also shared our excitement for Pokemon.  A short time later I became a League Leader there and later became a Premier Tournament Organizer in Jan of 2006.  I run events mostly in the Rockford IL area at Top Cut Comics (previously Tomorrow Is Yesterday) , but I also hold events in Madison WI, Oconomowoc WI,  and help with Prereleases in Rantoul IL, along with Nicole Simmons.  I’m also involved in larger events in the area, such as WI State Championships, IL State Championships and MW Regional Championships.
People often comment on the Pokemon hats I make and give away at a lot of my events, and for me it’s been great fun to see how excited some of the players have gotten over the years to win one.  It’s been fun make all these different hats over the years, and I’ve made each and every one with ‘Mama’ love ^___^  So far I’ve turned 101 different Pokemon into hats, and it’s been quite a challenge for some of them, but always a labor of love.

I created this website several years ago to help people in the area to have an easy way to find out about the events I’m running, so that they could be sure not to miss them. Over time, I’ve added many features that I thought would be of interest to my players as well. I’ve included direct links to specific areas of the Pokemon website, such as the tutorial on How to Play and how to create a Trainer Club account, as well as useful sections like locations for all the MW Battle Roads or City Championships, to make it easier for our traveling players. If you ever have any suggestions for additional things that might be helpful for me to include here, by all means contact me and I’ll see what I can do to add them. I look to have this as a helpful resource site for players and organizers in the area. My Archives page is a chronological collection of all the events I’ve done over the past several years. Now that I’ve switched to WordPress, they’ll be archived by catagory, but all my past ones are still on the old Archives page for those of you who occasionally enjoy a stroll down memory lane.

I love Pokemon dearly and over the years I’ve met many, many wonderful people through my involvement.  It’s been so much fun for me to literally watch some of our players grow into adults right before my eyes,  and I adore spending time with everyone involved. Players, parents, Judges, other Organizers… they are some of the most amazing people I’ve ever met!  They’re all like extended family, or Ohana,  to me, and I look forward to seeing each and every one of them at my events! Hope to see you at one soon!